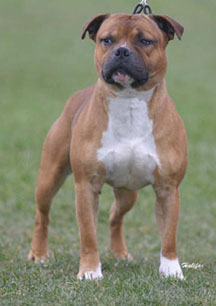 Achievements:
Clyde  is 16″ and about 40 pounds. He is a well constructed dog with a nice balance. He could go down to 38 pounds but he would seem to thin for me. I like him at this weight. His crowning glory is his magnificent head. He has a scissors bite. He is short coupled with strength of hind quarters. He moves smoothly and effortlessly.
Clyde  finished his championship in the USA at just 1 year old under the excellent handling of his now co-owner/handler Delores Dills. He spent sometime preparing for his trip to UK with my good friends Liz and Paul Stanway. He was shown and did quite well for an American import. He was the BISS winner at the prestigious Northwest Staffordshire Bull Terrier Club in 2006. This is no easy feat with over 200 SBT’s showing. Many thanks to Liz and Paul for caring for Clyde and showing him there. I know they wanted to finish his championship there but we missed him here and wanted him to come home. Reluctantly they agreed.
His biggest accomplishment is not the many wins or placings he received but what he left behind. A bit of Clyde will forever stay in the UK.
Clyde is the sire of the Top Puppy Bitch in 2006 Waystaff Lucky Strike “Nina” owned by the Staway’s. Nina is a multiple Best Bitch winner and was placed 5th this year at Crufts in her class.
Clyde is sire to Waystaff Strikes Gold “Poppi” who is a multiple RBBIS, multiple class winner and placed 1st in Graduate at the 2008 Crufts.
Clyde is the sire of Russtaff Clyde’s Pride “Declan” #4 Top Winning Puppy Dog 2007
Clyde is the proud dad to the Top Puppy Dog and Top Junior Dog for 2008. These titles are held by one dog for 2008 – Waystaff Strikes Back – the naughty Dexter went on to achieve his UK championship and be awarded the Top Dog in 2009.
Although listed last but by far not least Clyde is the sire to his first English Champion Waystaff Strikes Again “Saddie”. Saddie has held the rank of #2 Top Junior, #3 Top Bitch 2007, with multiple BOB wins, multiple RBIS wins and of course the RCC at Crufts in 2008. Saddie is Clyde’s first UK champion. We are very proud that we were able to leave the UK such a nice bitch to carry on.
Clyde is sire of multiple champions in the USA.  One is a champion  Ch ClassyStaffys Whodaknown owned and loved by my best pal and partner in crime MaryAnn Gaffney. “JACK” as he was known by his friends was a lovely pied male out of our girl Amy. Clyde is the sire to GCH Classy Staffys An Outlaw Gang, RN, NAP, CGC and his littermate sister Ch Classy  Staffys America’s Most Wanted. This is a produced of a brother/sister mating with Ch Classy Staffys Strikes Again. This only names a few of Clyde’s kids as he has many more. Including champions in the UK.
As you can see being a champion doesn’t make for a great dog but being a beautiful dog who can reproduce the best is what makes him special.
Clyde is at stud to approved bitches with health screens done through AI frozen.
Critiques;
Darlington
Judge- Kerrie Reeder
1st place open dog/RCC
Very typical three year old red dog excelling in head properties. He has dark round eyes, a deep underjaw, great depth of stop and a strong blunt muzzle.This lovely head is set off by neat, rose ears.Correct regular scissors bite with locking canines.Well balanced throughout with quality, round bone corect substance. Well constructed forequarters with straight front legs, the required turn out of pasterns and the correct lay of shoulder to produce ample prosternum. Strong, short coupled body leading into well muscled hindquarters with well let down hocks. Pushed the CC winner all the way, losing out  in the final decision on the CC winner’s superior hindquarter movement. A top quality dog that should be recognized for his many virtues. A worthy winner of the RCC.
North West SBT Club Diamond Jubilee Show
Judge- Mr. Brian Grattidge
1st place open dog/CC/BOB/BIS
Red and white, good strong head and correct expression, neat ears, good front, level topline, stood foursquare, good spring of rib, moved and handled well. CC,BIS
↑